This page is meant to be a very brief review of my past papers for both astronomers and non-scientists alike.

If you're an astronomer who wants to get the main points out of a paper but can't be bothered to open the pdf and skim our discussion and conclusions sections, I have a TL;DR version for you.

Meanwhile, if you're not an astronomer or scientist and want to get the point without all the jargon, I've tried to make simplified ELI5 sections for you.

This is an experiment, so please let me know if this page was any help to you (and why) or if you think it can be improved somehow! I do think everyone should make an effort to explain their scientific results in a more accessible form alongside their official peer-reviewed papers; this is my first attempt. 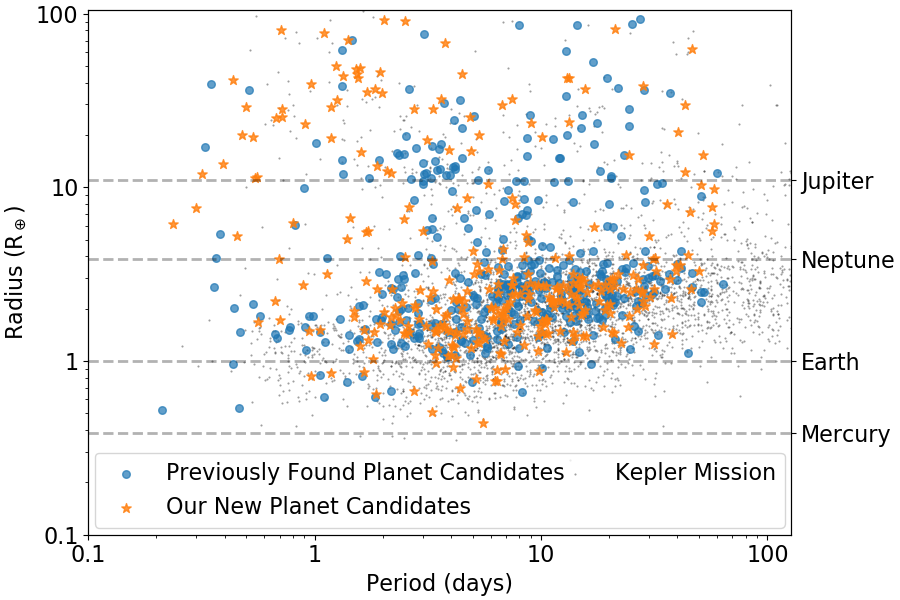 This paper made up the bulk of my PhD thesis. In it, I significantly revamped the Quasi-periodic Automated Transit Search (QATS) to make it significantly more sensitive to both regular periodic planets as well as TTV systems. I also made an initial attempt to simultaneously detect single transit events.

Our first application of our new QATS planet search was on the first 9 K2 campaigns, all of which had previously been thoroughly searched by at least 3 groups. Nevertheless, we found over 350 new planet candidates in these K2 campaigns, as shown in the figure.

Some of the highlights of the candidates: a six-planet system, two five-planet systems, a planet with extreme TTVs, and multiple single-transit planet candidate events. We also found an outer third planet candidate in the K2-83 system that has a size on the border between rocky and gaseous and is in the habitable zone.

This paper made up the bulk of my PhD thesis. In it, I developed a new search technique to find transiting planets. I applied my search to 150,000 stars observed by Kepler for 80 days each in its K2 mission.

All of these stars had already been searched using more traditional transit searches by at least 3 other groups. However, all our improvements meant that we were able to find about twice as many planets as all the other groups combined had found, as can be seen in the figure. In total, our new search allowed us to discover over 350 new planet candidates.

Free unrestricted reprint and published full text courtesy of Science as well as the arXiv version.

For an animation of the microlensing pulses, see this video made by Eric Agol.

This was the discovery of the first ever periodic microlensing signal. A WD and main sequence G star are in an eclipsing 88 day orbit. The Kepler pipeline detected the white dwarf's occultation as a KOI. Roughly half a period later though, I discovered pulses instead of primary eclipses — the G star gets brighter as the WD passes in front and lenses the light, looking identical to an upside-down planet transit (Figure of pulses and occultations on right). This type of self-lensing binary system was first predicted in 1973, but never observed until now.

We used an MCMC analysis and stellar models to constrain the mass of the WD to be ~63% solar. The system is likely around 1.6 Gyr and the primary is very similar to the Sun.

Because we have periodic eclipses AND pulses, with followup spectra we will be able to measure very accurate masses and radii for both stars, which will particularly help constrain the WD equations of state and the mass-radius relationship. Future discoveries of similar self-lensing systems with neutron stars may also be a great way to test NS mass-radius relationships.

Finally, this system must have gone through a common envelope phase when the WD formed. This is the longest period post-common envelope eclipsing binary found to date (by a factor of 10!). As such, it's going to help constrain binary evolution models. 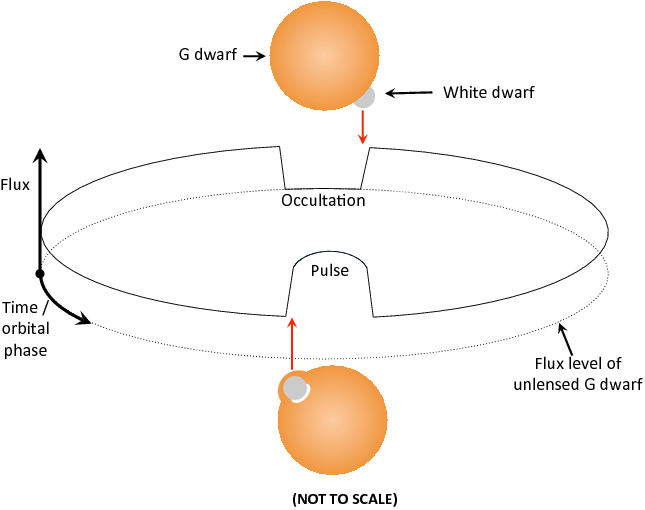 More than 40% of stars are in pairs that orbit around each other, called binary star systems. If those orbits are aligned just right, here on Earth we briefly see the binary system get dimmer once every orbital period when one star passes directly in front of the other, blocking some light and causing an eclipse. This periodic blocking of light every orbit is how we know a star has a companion — either a planet or smaller, dimmer star. In this paper though, we announced the discovery of the first binary system that gets brighter when one star passes in front of the other. This is the equivalent of something crossing in front of the sun, but instead of casting a shadow, the sun gets brighter!

This strange effect is caused by Einstein's general relativity. When smaller stars die, they leave behind only their core (called a white dwarf, WD) — something around the mass of the Sun but the size of the Earth. Einstein's theory of general relativity says a WD's strong gravity will bend light around it, essentially acting like an Earth-sized magnifying glass. When a WD is in a binary system and magnifies its companion's light it is called a self-lensing binary star system, hence the title of this paper. Here on Earth then, once every orbital period as the WD passes between us and its companion we would see the binary system pulse – get briefly brighter instead of dimmer like a normal eclipse.

To get a pulse instead of an eclipse, the alignment and orbit has to be very unique. Astronomers first predicted such self-lensing binary systems should exist back in 1973, but in this 2014 paper we announced the first ever discovery of one. This is incredibly cool in its own right, but also scientifically valuable. The magnification combined with the dimming half an orbit later (when the WD goes behind the other star, see the Figure) will provide accurate measures of the mass and radius of the WD, which is usually much harder to determine if you don't see the magnification effect. Like the first planet, this first self-lensing binary discovery is just the tip of the iceberg. As other groups start to discover more of these, we'll collect precise masses and radii of many WDs and can test our models of particle physics in ways that even the best supercolliders on Earth can't approach.

In addition, even though most stars are in binary systems, we have many open questions about how they form and evolve. This system is the longest period eclipsing binary with a WD found to date (88 days), which will allow us to start to answer some of those questions.